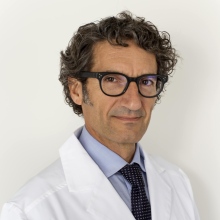 BIOGRAFIA JORDI MONÉS I INSTITUT DE LA MÀCULA I DE LA RETINA
Dr. Jordi Monés is an MD ophthalmologist, Macula and Vitreorretinal Specialist, and macular and retinal degeneration Researcher.
A graduated in Medicine and Surgery at the University of Barcelona, he subsequently specialized in Ophthalmology via MIR at Centro de Oftalmología Barraquer and later went on to further his training abroad for a period of 3 years. During this time he was Retina Research Fellow in the Massachussets Eye and Ear Infirmary at Harvard University, as well as completing a Clinical Fellowship program in the Hospital San José at the Monterrey Institute of Technology and Higher Education. On his return to Barcelona he continued his clinical and research activities at the Hospital Dos de Maig de la Cruz Roja and at Institut de Microcirurgia Ocular de Barcelona (IMO) until 2006.
He is currently the Director of the Institut de la Màcula i de la Retina, where he is exclusively devoted to the treatment and research into diseases of the macula, retina and the vitreous. His particular fields of interest are macular diseases, choroidalneovascularization, exudative age-related macular degeneration, antiangiogenesis, antiangiogenictherapy, antiplatelet-derivedgrowthfactortherapy, dry age-related macular degenerationgeographicatrophy, retinaldegeneration, chorioretinaldystrophies, choroidalcirculation,retinaltransplant, neural andmesenchymalstemcells, genetics in retinaldegeneration, diabeticretinopathy, macular edema, vitreoretinalsurgery, macular surgery, fundusimagingandfundusmicroperimetry.
He isalsoelected Coordinator of theSpecialty of Ophthalmologyatthe Centro Médico Teknon.
Over the last 12 years he has been one of the researchers closely involved in most of the clinical trials conducted in international centres for the treatment of age-related macular degeneration (AMD) as Principal Investigator.
Dr Monés is Elected Member of the AMD and Retinal Dystrophies Expert Committee of the European Vision Clinical Research Netwwork (EVICR.net), and is scientific advisor of various research groups such as the AMD international Alliance and retinal drug developers.
The Institut de la Màcula I de la Retina, acredited site of the network of excellence in research, European Vision Institute, is currently conducting Phase I, II and III Clinical Trials.
Currently Dr Monés and his team are involved in 2 Phase III Clinical trials for exudative AMD, and participates and coordinates the 7 spanish research sites of a Phase II clinical trial using the aptamer anti PDGF in combination with anti VEGF therapy. In addition, he is conducting another phase II of his own design using anti PDGF therapy in non-responders to anti VEGF therapy. He is also conducting a Phase I Clinical trial for the atrophic form AMD with geographic atrophy with anti complement therapy. Dr.Mones has co-designed this Trial together with the researchers at Ophthotech who have developed this aptamer. Nowadays, this is one of the earliests worldwide experimental clinical approaches to this devastating disesase, without cure so far, and the first and only site in Spain conducting phase I trials for atrophic AMD.
His work has been widely published in scientific journals and specialized books, and he has given more than 200 talks at international conferences and congresses. He is a member of 12 scientific societies, among which we may mention the Macula Society, the Retina Society, the American Society of Retina Specialists, the American Academy of Ophthalmology, the Association for Research in Vision and Ophthalmology, the European Vision Institute, Euretina and the European Association for Vision and Eye Research.